Nobody said it was easy....

Commonly on higher mileage cars (usually 50,000+), drivers will experience an annoying ticking or rattling noise coming from the engine. It is most prevalent during cold weather or on short trips. The ticking noise is caused by the hydraulic valve adjusters, also known as lifters, not getting enough oil to function properly.The lifter ticking noise isn’t detrimental to performance or harmful to the engine, but rather it is extremely annoying and more of a nuisance.

How to Fix Lifter Ticking Noises

The first route, and free route, to take is to “bleed” the lifters. To do this, drive only the highway for 30-minutes at high RPM’s (>4500rpms). Most of the time bleeding the lifters is a temporary fix that may work a few times in a row until a more permanent solution is needed.

The permanent solution is to replace the lifters and the cylinder head with the newly designed post-2008 parts. Unfortunately, I don’t think any pre-2009 N52’s have any warranty left, so you will be footed with a $2-3k bill to get this issue replaced if it hasn’t already been taken care of.

I suppose the third option is to just drive with the ticking noise and put up with it.

Nobody said it was easy....
Omhoog 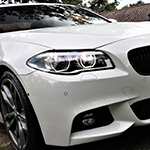 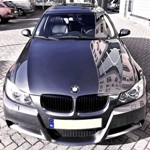